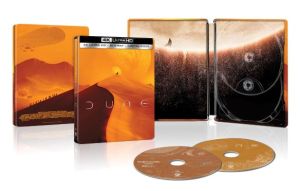 Directed by Denis Villeneuve, this version of Frank Herbert’s popular 1965 sci-fi novel is the first of a two-part adaptation.

Directed by Denis Villeneuve, this version of Frank Herbert’s famous 1965 sci-fi novel is the first of a two-part adaptation. This story covers only the first half of the novel and features Timothée Chalamet as Paul Atreides, the son, and heir of the House Atreides. His duke father, Leto (Oscar Isaac), accepts the stewardship of a planet called Arrakis. Since it’s the primary source of a most coveted substance called the melange, the leadership of its mining industry has been contentious, which the heir will soon find out. Co-starring Josh Brolin, Stellan Skarsgård, Dave Bautista, and Zendaya.~Olivia Cantor

ON SALE -- come check us out before SW Celebration!
In our headcanon fanfic about Grand Admiral Thrawn, we call him a SIGMA MALE - an socio-sexual hierarchy. Of course this hierarchy is pseudoscience fiction.
Support Star Wars Actors Guild 77 (SWAG 77) on Patreon!