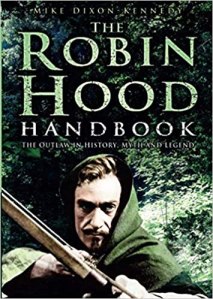 Whether riding through the glen, robbing the rich to pay the poor, or giving the Sheriff of Nottingham his comeuppance, Robin Hood is one of the most captivating and controversial legendary figures. Was there a historical figure behind the legends? Did Robin and his Merry Men rampage through Sherwood Forest? Or did he spend most of his time in Barnsdale Wood in Yorkshire? And is the story of the freedom-loving Saxons refusing to be put under the Norman yoke, as portrayed in the Errol Flynn films, true? Mike Dixon-Kennedy ranges far and wide in his quest to present a complete picture of the exploits of this indestructible hero, drawing on ballads, poems, proverbs, films, novels, folklore, musicals, and place-names.

Another story that is a Legend that has several versions fans have read.

Ahoskat T-shirt -- a cute Lothcat to wear on one of your convention days by SWAG77 art by PM
SW Ahsokat v1 in The Sleepy Lothcat collection. Fun to have like trading cards.
Support Star Wars Actors Guild 77 (SWAG 77) on Patreon!