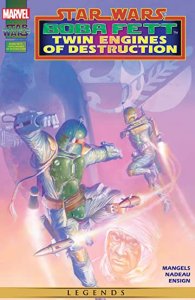 Boba Fett: Twin Engines of Destruction is a comic story originally published by Dark Horse Comics as a one-shot issue in 1997.

The importance is after Boba Fett killed Jodo Kast and left him on Nal Hutta, at some point, someone picked up Kast’s Mandalorian armor and sold it on the black market.

Jodo Kast was a member of Alliance SpecOps who became a bounty hunter in the Galactic Civil War. Kast wore Mandalorian armor similar to Boba Fett’s, while he was not a Mandalorian himself. Having once modeled his career after Boba Fett, Kast later established himself as a rival to Fett, concerning himself with building his reputation. Forsaking even the rules of his profession, Kast took Fett’s name for the sake of higher-paying jobs while setting the goal for himself of taking Fett’s place in the top echelons of bounty hunting. Kast’s impersonation of Fett eventually caught up with him, though, when the other bounty hunter sought to reclaim his own reputation. Fett baited a trap on Nal Hutta, using an alias to offer a bounty on a nonexistent man. When Kast came to Nal Hutta, Fett attacked and defeated him, leaving Kast to be killed by his own exploding jetpack.

SW Ahsokat v1 in The Sleepy Lothcat collection. Fun to have like trading cards.
Don’t let yourself be silenced by doubters of your extraordinary talents. If you have an idea, share it. Critique is where they find the good things about your idea and suggestion of revision. But do not let doubters silence you.
Support Star Wars Actors Guild 77 (SWAG 77) on Patreon!