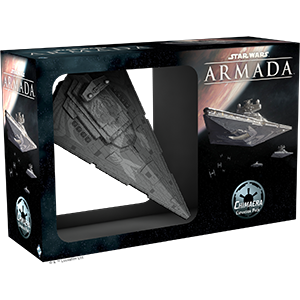 There are three Fleet Command upgrades in the Chimaera Expansion Pack, and each of them offers a devastating change of tactics to give you the upper hand. Entrapment Formation! gives your ships an added edge in maneuverability, changing their speed when they determine their course. Intensify Firepower! can guarantee that every friendly ship gets at least one hit during an attack. Finally, Shields to Maximum! gives you the opportunity to recover your shields and boost your ships’ defenses. Obviously, each of these Fleet Command upgrades require you to spend command tokens or discard the card if you want to use them—offering yet another reason why you might want to consider Taskmaster Grint as one of your fleet’s officers.

In addition to a repainted, refitted Imperial Star Destoyer and a true wealth of upgrades, this expansion also includes two new squadrons—the Mandalorian Gauntlet Fighters. In addition to being hard-hitting in combat, the Mandalorian Gauntlet Fighters are Rogue squadrons—meaning they can both move and attack during the Squadron phase. What’s more, they’re adept at intercepting your opponent’s commands and helping to dispel his control over his fleet.

Mandalorian Gauntlet Fighters benefit from the Assault ability—allowing them to sacrifice a hit when attacking a ship in order to give that ship a raid token. Each raid token bears a symbol matching a type of command—and while a ship has that raid token, it cannot execute that type of command! Perhaps you desperately want to stop your opponent from repairing his ship or you need to pin down his squadrons. By sending your Mandalorian Gauntlet Fighters out on assault, you can keep those commands from interfering with your own well-laid plans.

Across the Galactic Civil War, the Rebel Alliance has faced few threats that can match the tactical genius of Grand Admiral Thrawn. A general with a strategic mind like no other, Thrawn has come closer than nearly any other opponent to bringing the young rebellion to its knees. With grand-scale fleet combat as Thrawn’s greatest area of expertise, it’s fitting that he now makes his debut in Star Wars™: Armada!

Clicks and purchase allows an infinitesimal %remuneration to SWAG77. Dismiss